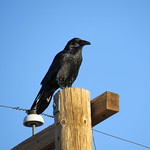 Ravens are popular in Alaska, and for much of the year, they’re the bird we see the most, possibly because their obnoxious croaking attracts one’s attention.

That croaking may be how they got their Greek name. The Greek word for “raven” is korax, –akos. If you’ve heard them, you have to wonder if their Greek name is onomatopoeiac. (From a Greek word that means what Greeks mean when they say echomimetico, which would probably be a better word than onomatopoeia.) I don’t know that, and BDAG is silent, but it seems likely to me. 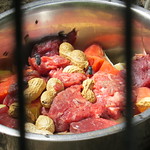 Certainly, Jesus is right that God feeds them. Ravens in Alaska are huge, like our deer and bears. I routinely see ravens as big as chickens—or maybe turkeys. What I’ve seen them eating isn’t very appealing, however. In the zoo (pictured right) it’s revolting, but in a parking lot, it’s worse.

Scavenging carrion may be one reason ravens were unpopular (judging from the Hebrew Scriptures) in ancient Near Eastern culture. Leviticus declares them unclean, Proverbs points to them as a caution, and Isaiah uses them in a curse. Only two references to ravens are neutral or positive: Noah initially sent out a raven, but we hear no more about it. Subsequently, Noah used only doves. In the Song of Songs, the woman compares her lover’s wavy hair to a raven.

But Jesus probably wasn’t thinking about that when he mentioned ravens. (Luke records Jesus saying “raven” specifically, rather than just “birds,” as in Matthew; Luke 12:24 and Matt 6:26.)

Two references in the Hebrew Scriptures suggest that Jesus was alluding to proverbial wisdom about ravens’ foraging ability: Psalm 147 credits God with feeding them. Job 38 uses this idea to illustrate how far God’s wisdom is above men’s.

But as Jesus’ audience considered ravens, they would surely have remembered how God provided for Elijah in the wilderness (1 Kings 17). Not only does God feed the ravens, but sometimes, God uses ravens to feed people. That was the point Jesus was making, that you don’t have to be anxious, since God will take care of his children. Maybe even by means of ravens.